First Time at the White House

I have covered a lot of cool stuff over my 25-plus years as a photojournalist. Ten U.S. Open golf tournaments, Four Masters Tournaments and played Augusta National. I have gone up in 2 blimps for shoots and ridden with game wardens in those cool little helicopters. I covered protests and Presidential speeches and have met countless famous people and some really neat not-so-famous ones.

But I don’t care how much you have shot and seen as a photographer, your first trip to the home of the leader of the free world is going to be pretty cool. And more than a bit nerve wracking.

I was covering the signing of the Health Care Reform Bill by President Obama at the White House for ZUMA Press. It was my first trip to the White House and I didn’t want to look too much like a tourist. Also didn’t need to be making any serious faux pas.

So I was the virgin of the day. But regardless, everyone was nice and helpful.

The first step was getting in the gate, and as of 7:00 a.m., I had not received the email from the press office granting my clearance. After checking in at the gate, they didn’t have my name either. Time to send some emails.

My email to the press office was replied to promptly and after giving them the required information about me and my purpose for seeking access, within 15 minutes I had clearance and was going though security.

Once I was scanned and cleared, I got directions to the press room and I was officially on the grounds of the White House.

Then it was the waiting game until the press officer gave us the clearance to enter the White House to stake out our positions in the East Room for the signing ceremony.

While waiting, it was obvious very quickly that most everyone had something I did not, a ladder. Some had smaller stepladders. Some had bigger ones, but most had one and it was not real apparent to me yet as to why. Even though I had knew there would be spectators there, I figured they would be seated. Well I was right, but apparently they also like to stand and applaud. A LOT. (You would think that after watching countless State of the Union Addresses, I would have thought about it.)

OK. Don’t panic. Just get a position in front of one of the guys on the ladder and do your best. Right?

We finally get the word and are escorted into the East Room. Since there is a pecking order, things where not looking good for a decent shooting position until I spied a spot in front of the television cameras right in the middle of the room. I was shocked. How could this spot be free? Well mainly because it was in front of the riser a TV camera that was suppling the only head-on live feed. The all-important pool camera.

One of the veteran photographers that I talked with a lot at the Capitol told me that it was not likely that I would be allowed to stay there, but I figured I would chance it and began the PR campaign with the cameraman.

I told him that under no circumstances would I sit, bump, lean on or touch the riser or the tripod. TV guys are real touchy about cameras that move when shooting and I don’t blame them. After all, I hate to see jumpy video when I am watching the news. He did not seem to mind me being there so I figured I had won most of the battle to remain. Then the moment of truth came.

The White House press wrangler came by about 10 minutes before the event was about to begin. She was very nice as she said I wasn’t supposed to be there. She asked the TV cameraman if he was cool, and then went on to explain that if I or the other woman who had now come to share the spot bumped the riser or the tripod or otherwise made the TV guy’s life miserable, that we would be removed and there would be a very public execution.

She was was trying to be nice, but also firm. I assured her that there would be not problems.

So there I was in a prime spot, directly in front of the podium where the President and Vice President would speak and a direct shot at the table where the signing would occur…. PROVIDED PEOPLE STAYED SEATED…. RIGHT?

Actually, it worked out pretty well. Sure there where some missed shots, but I felt pretty good about what I got. 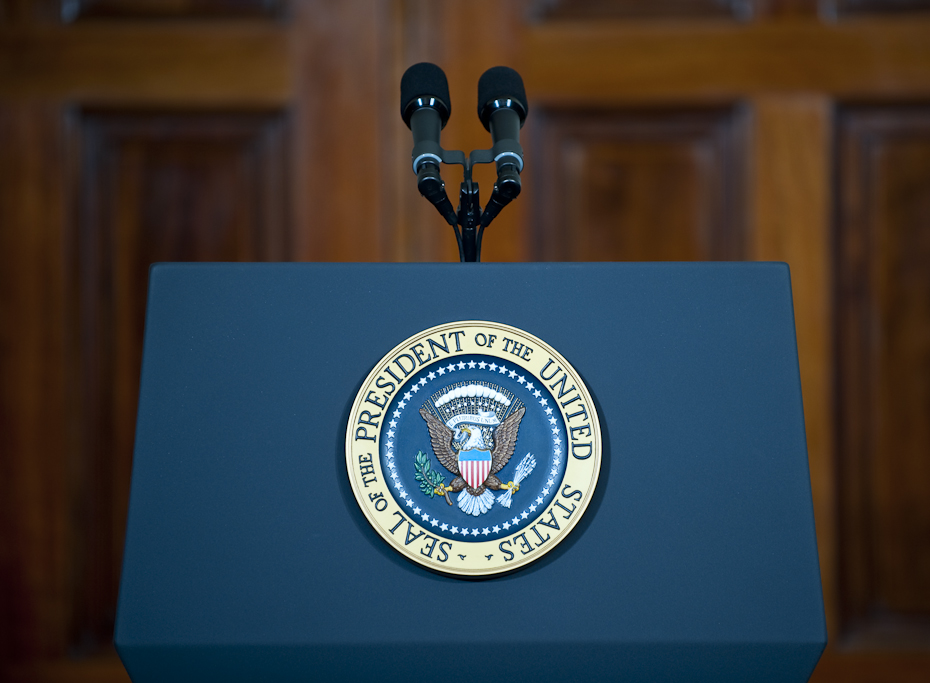