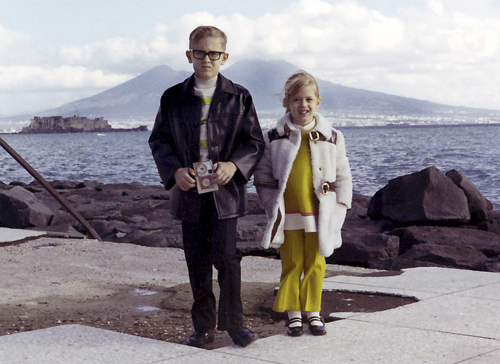 This photo to the left, taken by my father of me and my sister, Denise, is one of my earliest memories of myself with a camera.

My father, a career Marine, was always taking photographs of us and the many places we were stationed over the years.

Back then, I also discovered photography. I would borrow my mother’s camera and take pictures of the places we went.

I didn’t think much of it at the time.

It was probably more about me trying to be like my dad.

Little did I know that one day it would turn into a career and a passion.

Award winning photojournalist Pete Marovich has been working as a professional photographer for 30 years since starting as a staff photographer at a medium-sized daily newspaper in Indiana and as a stringer for the Associated Press.

From 1986 until 1999, Pete worked as a contract photographer for major golf publications while covering the professional golf tours. He has been published in Sports Illustrated, Golf Magazine, Golf Digest, GolfWeek, Golf Tips and many international golf publications.

Pete returned to newspaper photojournalism in 2001. He became Director of Photography at the Daily News-Record, a medium-sized daily newspaper in Virginia in 2005.

While at the Daily News-Record he was named the 2008 NPPA Region 3 Photographer of the year as well as runner-up in 2006 and 2009. Region 3 is made up of Delaware, District of Columbia, Maryland, New Jersey, Pennsylvania, Virginia and West Virginia. In January of 2010, Pete resigned his position as director of photography at the Daily News-Record to pursue personal projects while working as a contract photographer for ZUMA Press.

From 2010 until 2013 he was the Washington D.C. Bureau Chief for ZUMA Press covering the White House and Capitol Hill.

He is currently working as a freelancer, contributing to Bloomberg News Photos, The New York Times, The Washington Post, The Washington Times, Getty Images, European PressPhoto Agency, and United Press International. His archive is represented by American Reportage.

Pete lives in the Washington, D.C. metro area with his wife, Jenny, and their two cats.

He is available for editorial assignments nationwide.