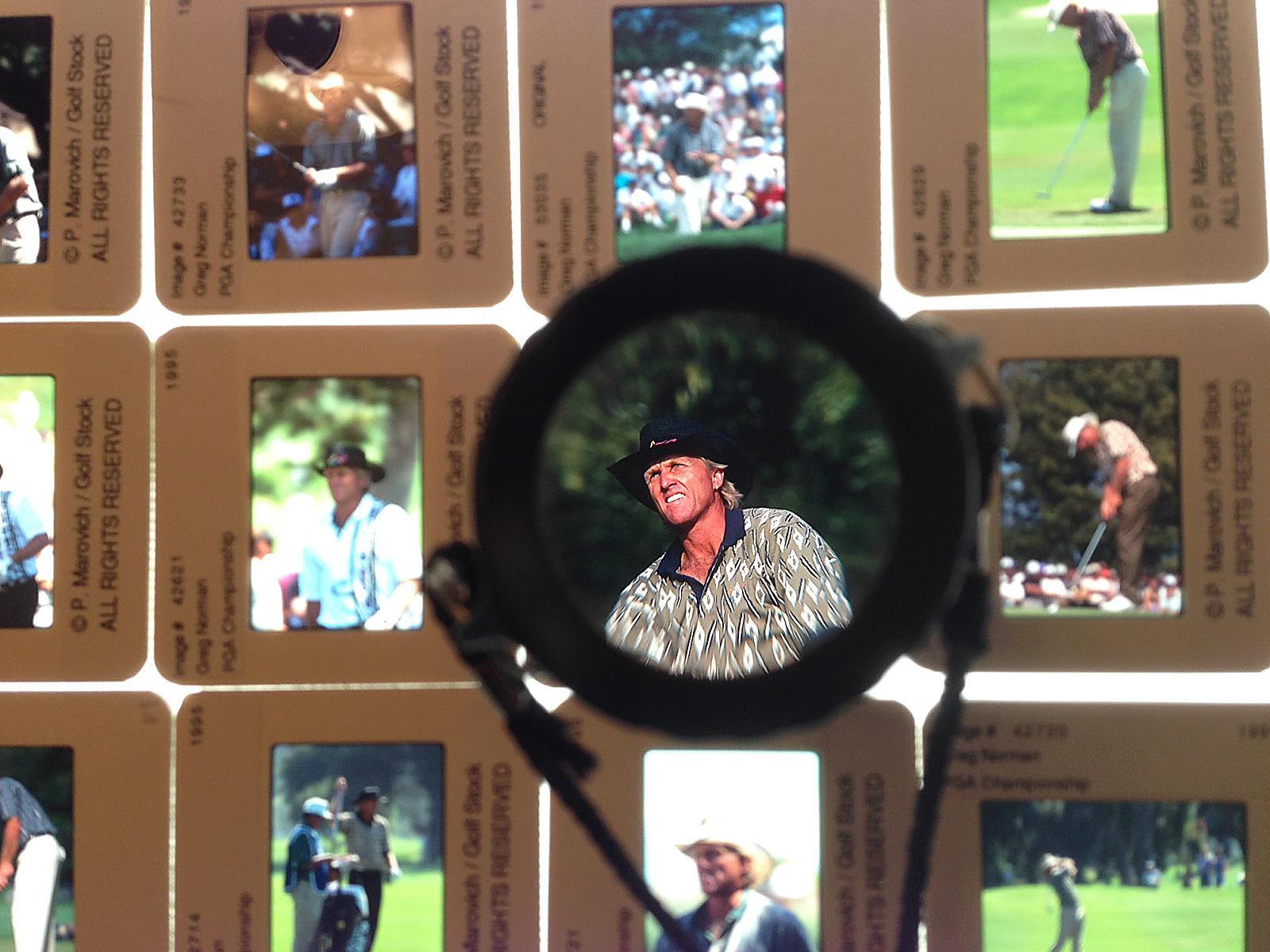 Greg Norman on the light table.

In another life, I made most of my income chasing a King, a Tiger, a Shark and a Bear, trying to make better photos than all of the other photographers following them on the professional golf tours. From 1986 until 1999 I worked as a contract photographer for most of the major golf publications in the United States and Canada. And I had a blast.

I was part of a group of about 10 photographers who regularly traveled to great places around the country to cover the PGA and Champions Tour (known as the Senior PGA Tour until October 2002). Basically, we were a bunch of nomads. But it was a tight-knit group of great shooters and good friends.

Since then, I have covered golf for newspapers and wire services, but back then it was not digital files, photoshop and transmitting directly to the client, like it is today. It was film — color transparency film to be precise.

And precise was exactly what you had to be to get the exposure just right, since slide film does not have near the latitude of negative film. After play ended on Sunday, you had to head to the airport and put the film on a plane for a courier to pick up and deliver to a lab near the client. 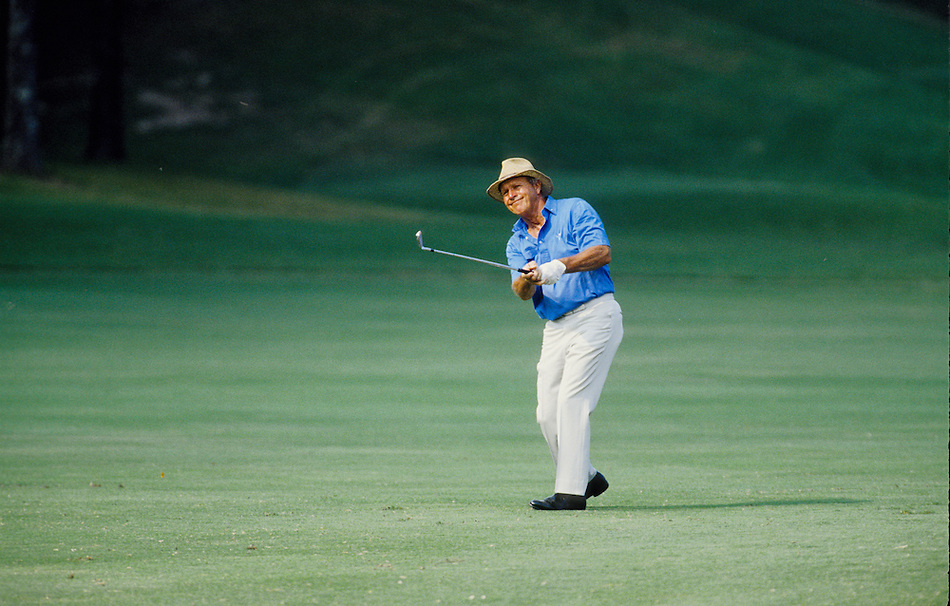 One of my favorite images of Arnold Palmer during the 1990 PGA Championship at Shoal Creek CC near Birmingham, Alabama. August in Alabama!

Then you had to endure a nerve-racking wait until Monday morning to hear whether there actually were images on the film and if you had managed to get anything that justified your day rate. The days of instantly checking your work on the back of the camera were just a dream at that point. I mean, back then you could not be sure the camera was even operating correctly.

This was also a time when photographers actually retained ownership of EVERYTHING they shot.

Which is why I am the proud owner of more than 50,000 color transparencies from my days as a golf photographer.

These images have been languishing in boxes for the past 14 years, but now that I have joined CORBIS as a contributor, they have agreed to market my golf library.

Of course that means that the slides need to be converted to digital. And, of course, since I am not about to have all of them scanned, they need to be edited. Oh goody.

A few years back, I discovered a company called Scancafe. They were recommended by none other than David Kennerly, and they are superb. Not quick, but relatively inexpensive and the scans they make are excellent and clean. This of course takes a large part of the work out of the equation. But there is still the editing….

So the dining table is covered, and boxes are stacked everywhere. My lovely wife, Jenny, is being as patient as anyone could be in this situation.

It will be a great winter project.

P.S. My wife suggested that I actually name the King, Tiger and Bear for those who, like her, don’t follow golf. The King is Arnold Palmer, the Tiger is Tiger Woods, the shark is Greg Norman and the Bear is Jack Nicklaus. If course there was also the Walrus (Craig Stadler). 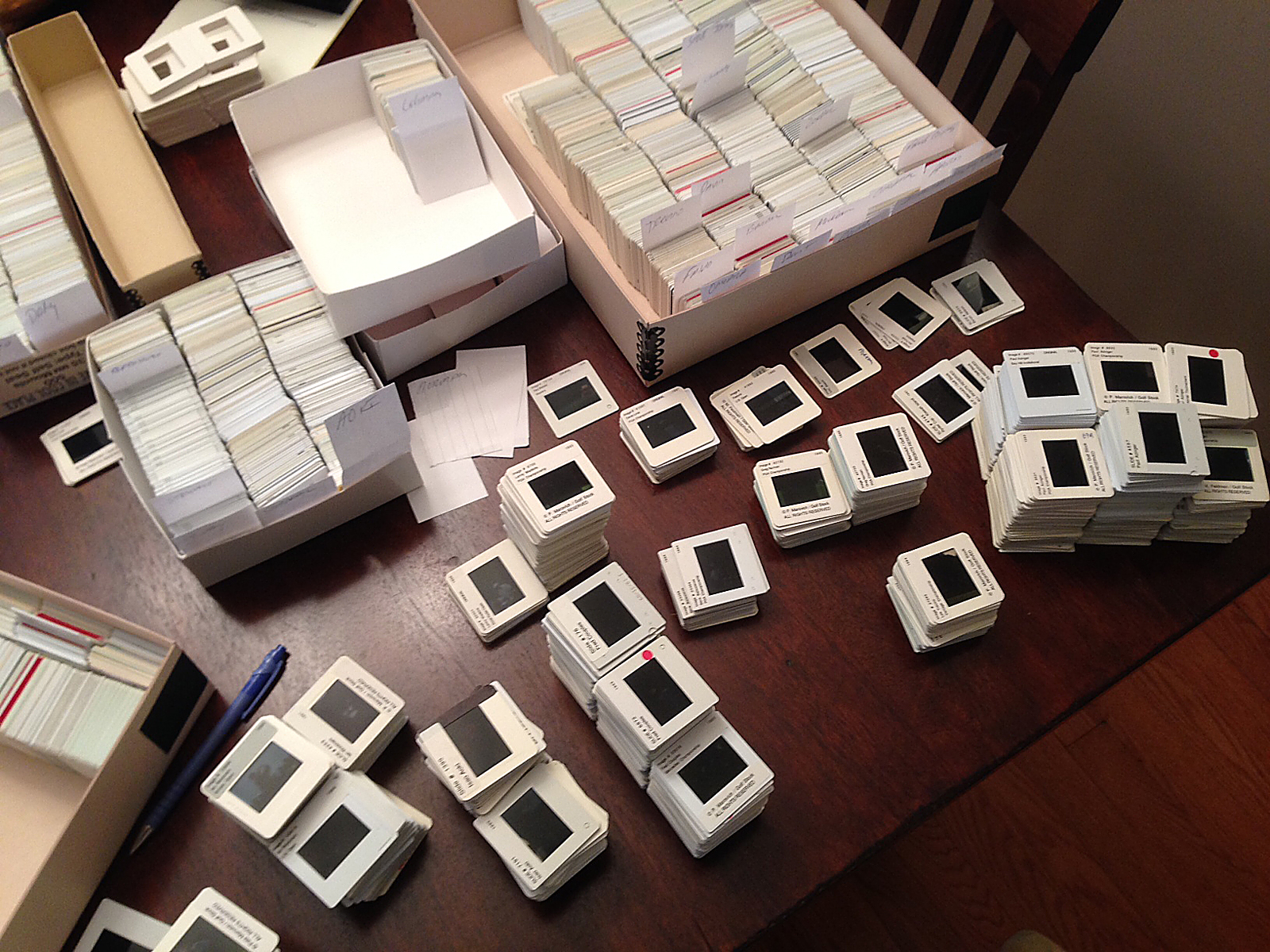 2 thoughts on “Sea of Transparencies”