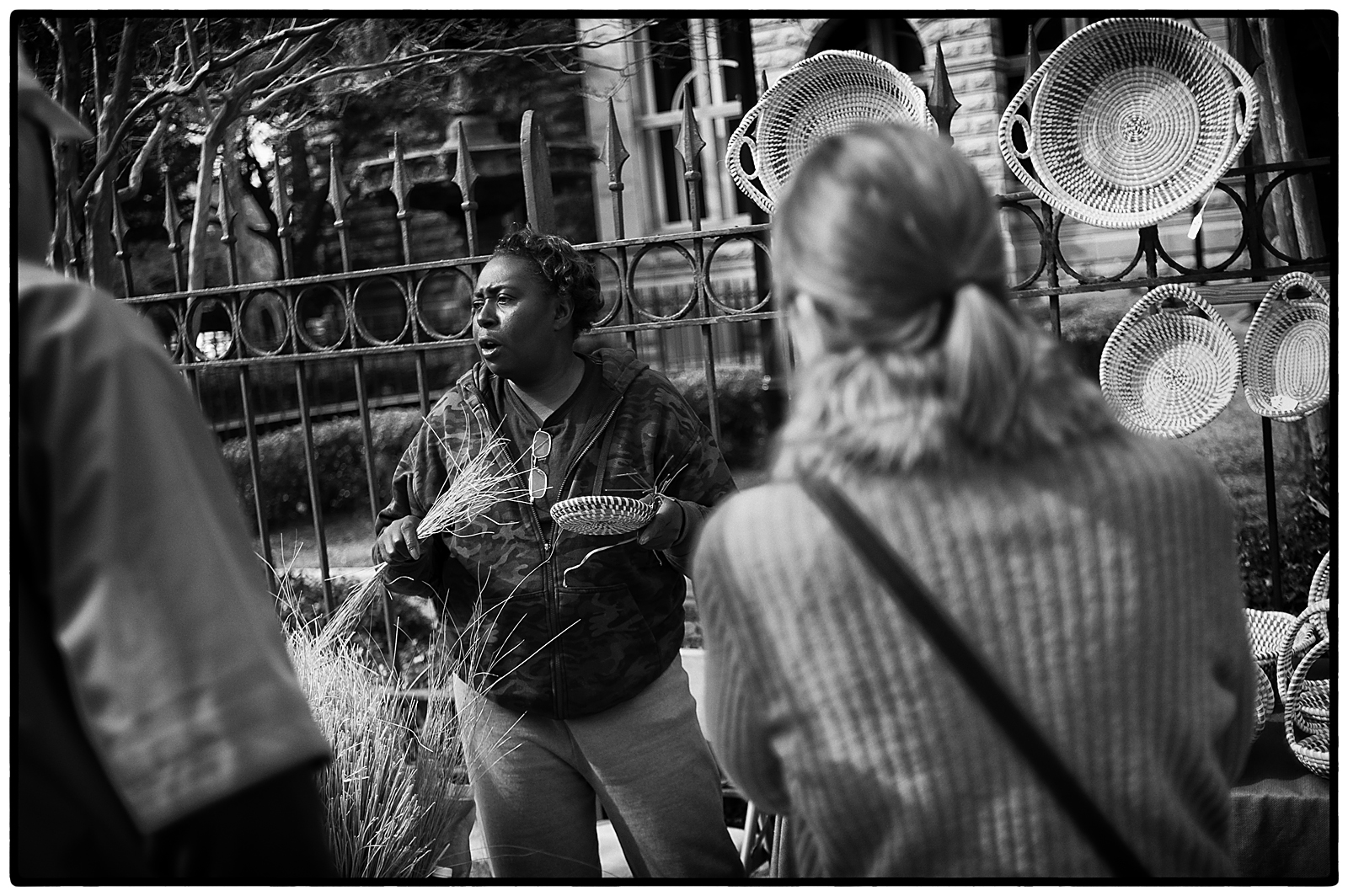 I recently made my first foray into the Charleston, S.C., area for this project. And the experience and people I met along the way were amazing.

I had to do a lot of research and make contacts with community members before leaving home. Project supporters and Charleston residents Greg Garvan and Susan Breslin helped me connect with some very helpful and influential Gullah community members. (Thank you!)

Charleston is a focal point for the Gullah Geechee people, many of whom call nearby Sullivan’s Island their Ellis Island. Enslaved Africans spent two weeks in quarantine on the island before being taken to the custom house in Charleston and sold into slavery.

I arrived in Charleston on a Sunday for a five-day trip. I spent Sunday afternoon getting my bearings before heading to my first appointment on Monday on Sol Legare Island, home to one of the few intact Gullah communities in the Charleston area. 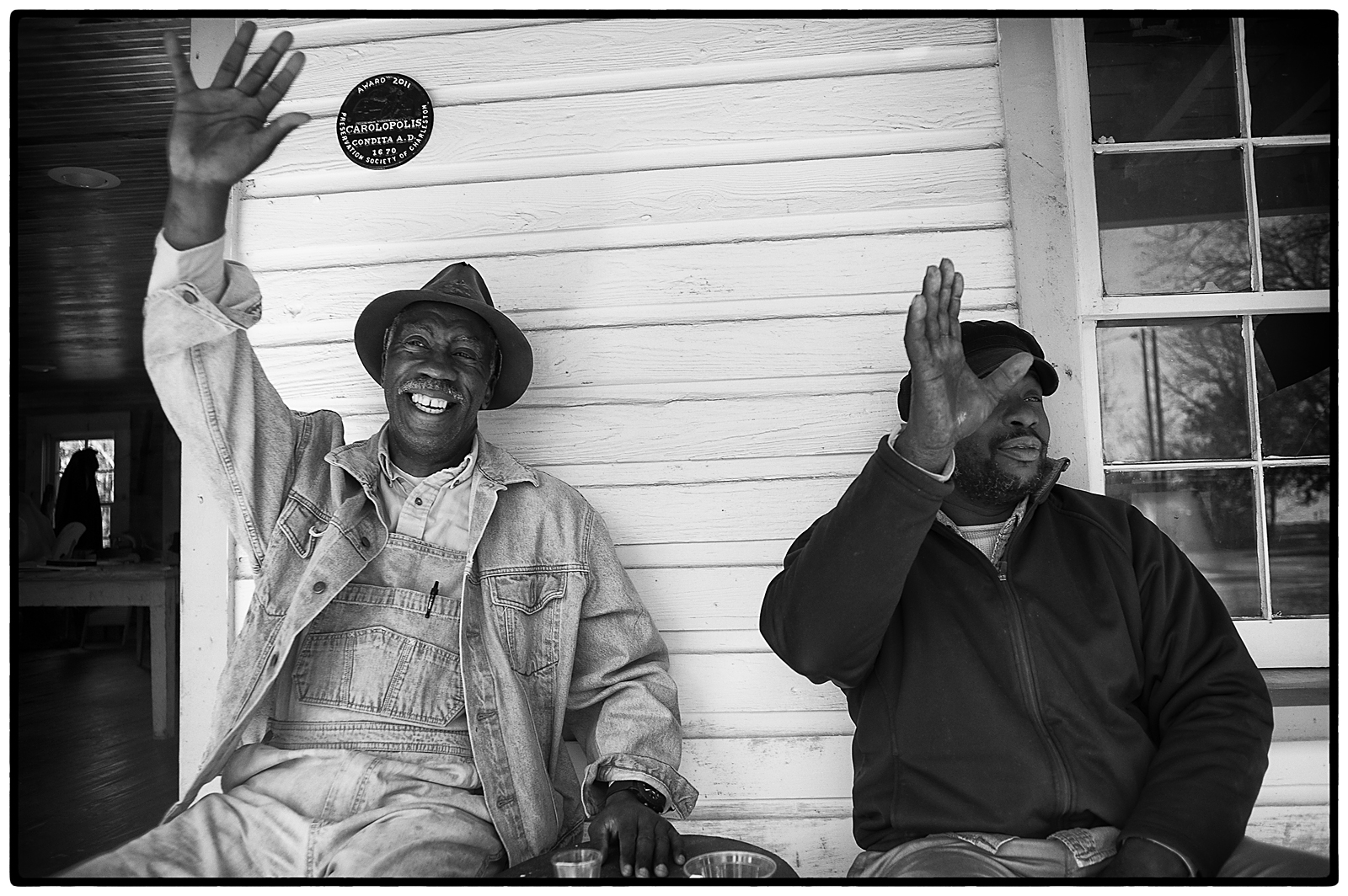 Ernest Parks and James Brown wave to passers-by from the porch of the Seaside Farmers Lodge on Sol Legare.

On Sol Legare Island, I met Ernest Parks, who serves as curator of the recently restored Seashore Farmers’ Lodge No. 767, which housed a community aid organization for more than 100 years and is now listed in the National Register of Historic Places.

Parks is also a Civil War reenactor with the 54th Regiment Massachusetts Volunteer Infantry. One of the first sanctioned African American regiments in the Union Army, the unit fought the Battle of Sol Legare in 1863. Two days later, it engaged in the Second Battle of Fort Wagner, as later depicted in the film “Glory.”

Mr. Parks was kind enough to show me around the community and introduce me to some of the residents, including his friend James Brown. Mr. Parks and Mr. Brown were a wealth of information and spent a great deal of time with me, sharing stories about the community.

After visiting for a while, Mr. Parks and I made plans to meet again on Wednesday to make a portrait of him in his Civil War uniform and visit Mosquito Beach, a strip of land along the marsh on Sol Legare Island. 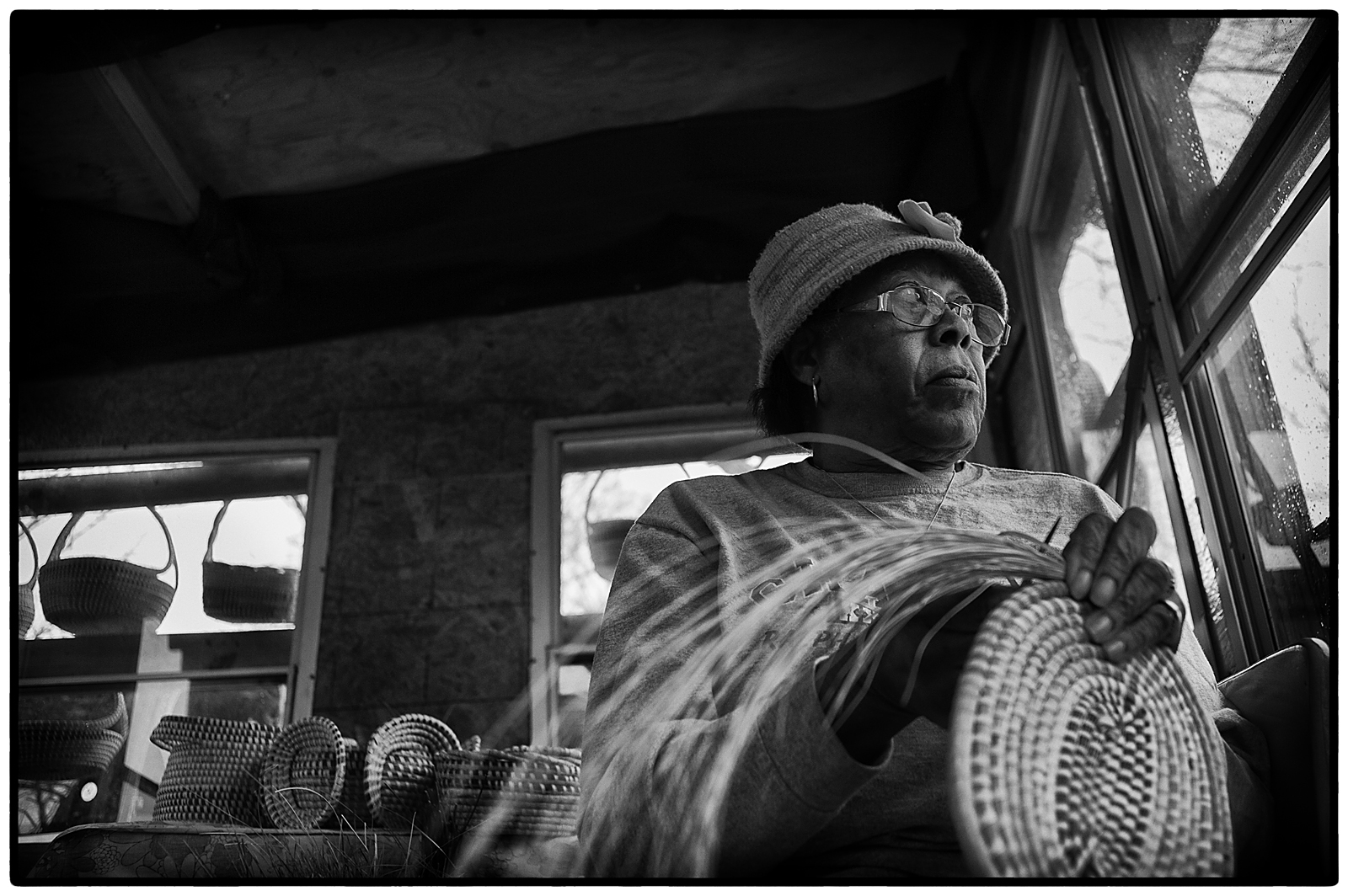 Alma Washington, 76, sews sweetgrass baskets in her stand along Highway 17 in Mt. Pleasant. Sweetgrass basketmaking has been part of the Charleston and Mt. Pleasant communities for over 300 years. Basketmaking is a traditional Gullah art form which has been passed on from generation to generation. It is considered one of the oldest art forms of African origin in the United States.

On Tuesday, I ventured out into the cold rain and headed to Mount Pleasant. After getting my bearings along the recently widened U.S. Route 17, I hit up a restaurant called Gullah Cuisine, which one of my Charleston contacts recommended for some serious Low County cooking. I was not disappointed.

Following a great lunch buffet, I headed out to see if I could visit with some of the Gullah artists that make the famous sweetgrass baskets alongside U.S. Route 17.

I stopped at the stand of Alama Washington and her sister Rosalee Coaxum. Both women were very generous with information and stories about growing up making the traditional baskets. After explaining my project and showing them some of the images I have made, they agreed to let me spend some time photographing them. 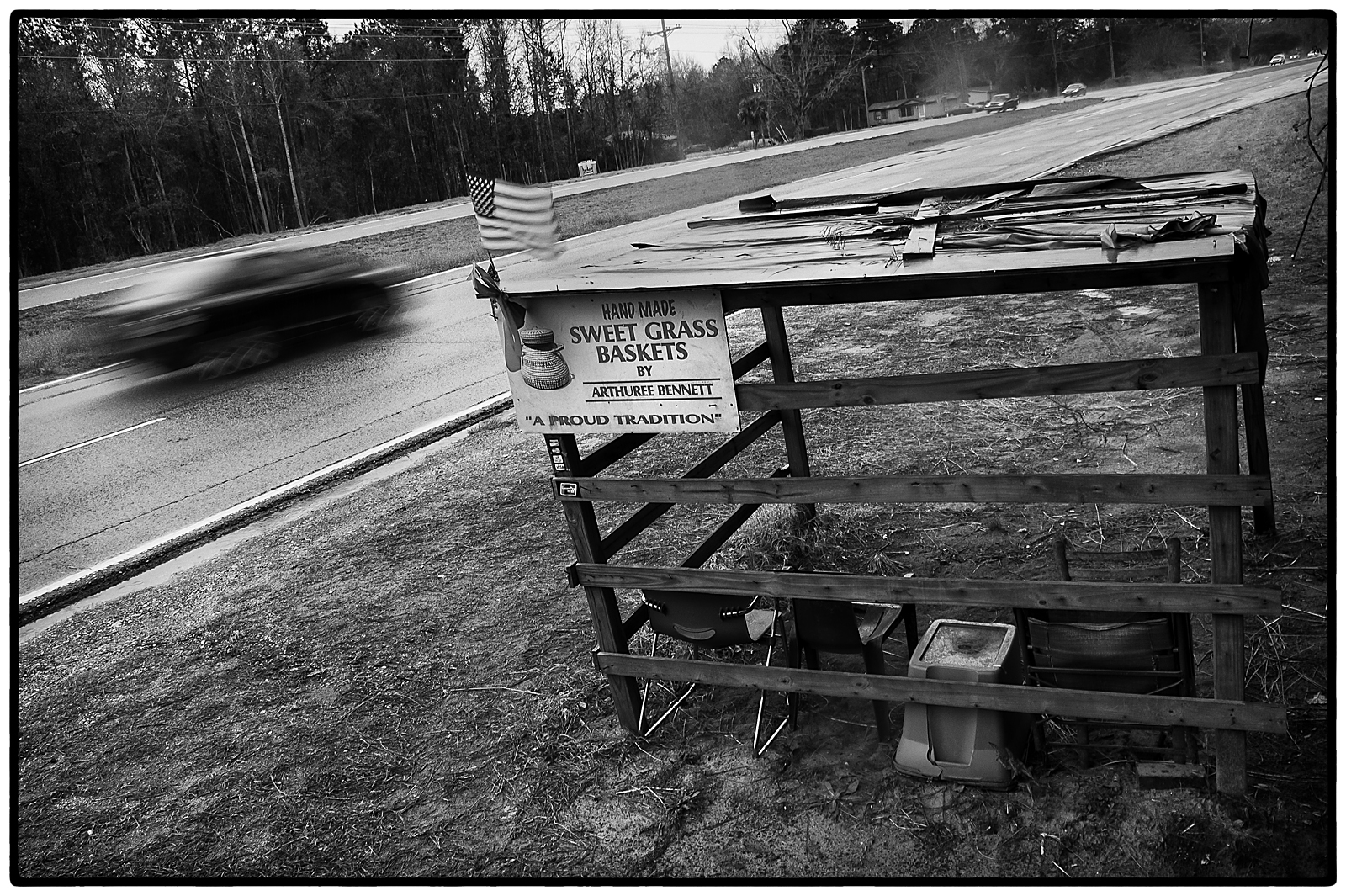 An empty sweet grass basket stand along Highway 17 north of Charleston, SC. Sweetgrass basketmaking has been part of the Charleston and Mt. Pleasant communities for over 300 years. Basketmaking is a traditional Gullah art form which has been passed on from generation to generation. It is considered one of the oldest art forms of African origin in the United States.

I drove up the highway a bit further and made a few more images in the rain before deciding to cash in for the day and return to the hotel.

Eugene Gilliard, 60, sews sweetgrass baskets along Highway 17 in Mt. Pleasant. He lives in an area known as 7 mile. Gilliard and his family have been selling baskets on the side of the road since 1947.

On Wednesday, I went back to Mount Pleasant and found 60-year-old Eugene Gilliard sewing a basket near the side of the road. He was also kind enough to let me spend some time with him and make photographs.

On my final stop of the trip, I returned to Sol Legare Island to make a portrait of Mr. Parks in uniform. The light was perfect for a portrait on the porch of the Seashore Farmers’ Lodge.

After the portrait, Mr. Parks took me to Mosquito Beach, which served as a recreational area for African Americans during the early 20th century, when segregation laws governed the beaches. Mosquito Beach is now home to a snack bar and four or so taverns. 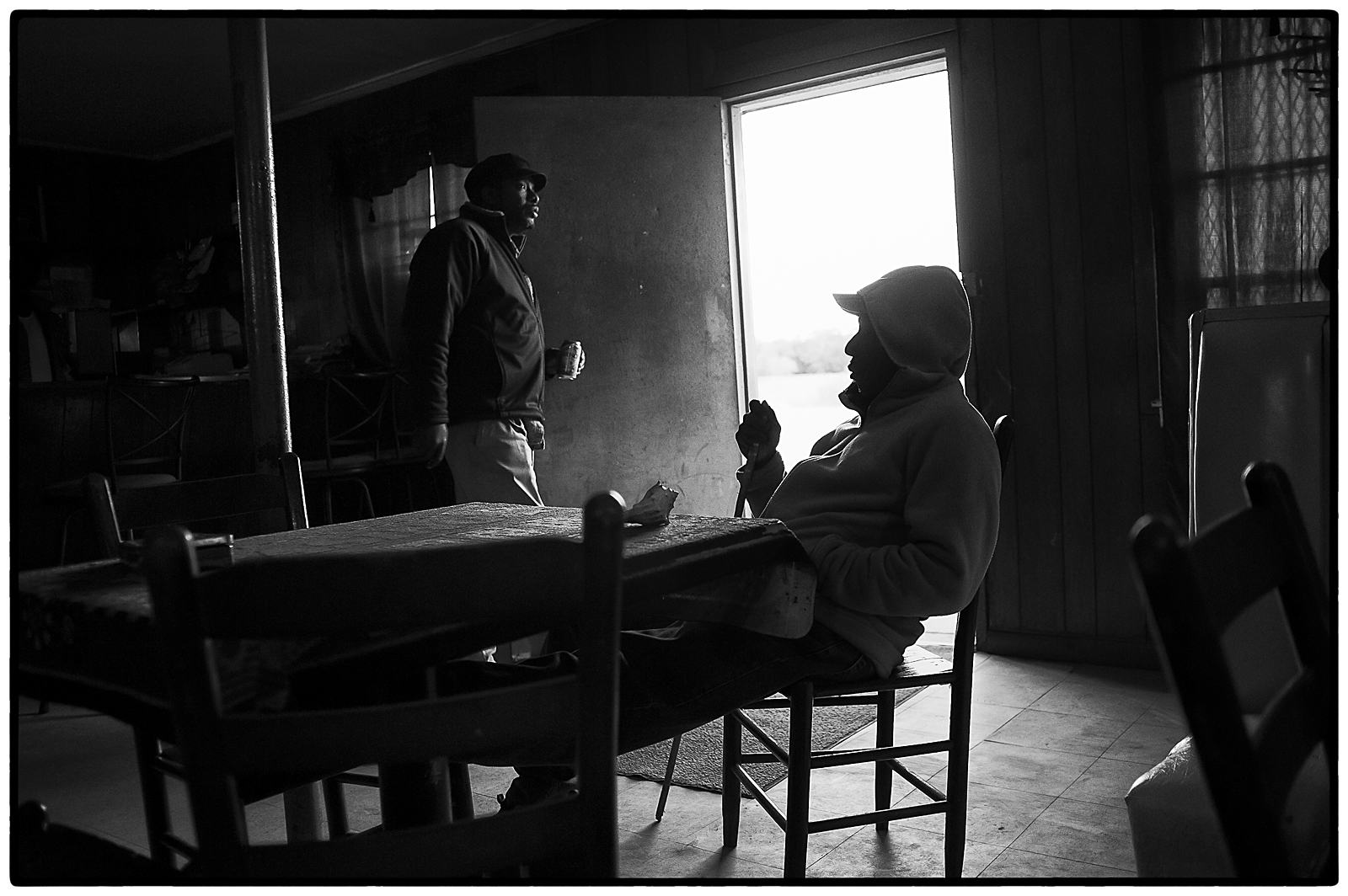 Tyrone Roper’s juke joint on Mosquito Beach in the Sol Legare community near Charleston. The “beach” was an important recreational site for African Americans during the early to mid-twentieth century when laws segregated beaches and other facilities.

As the sun set over the marsh, I spent a few hours hanging out with the locals and making images in the snack bar and one of the taverns. Since it was a bit cold and in the middle of the week, it was not very busy. I look forward to returning on a weekend, once the weather warms.

More to come from Charleston…

In the coming weeks I will send out another email with more images and insights from the trip to Charleston.

2 thoughts on “Shadows of the Gullah Geechee – February Update”