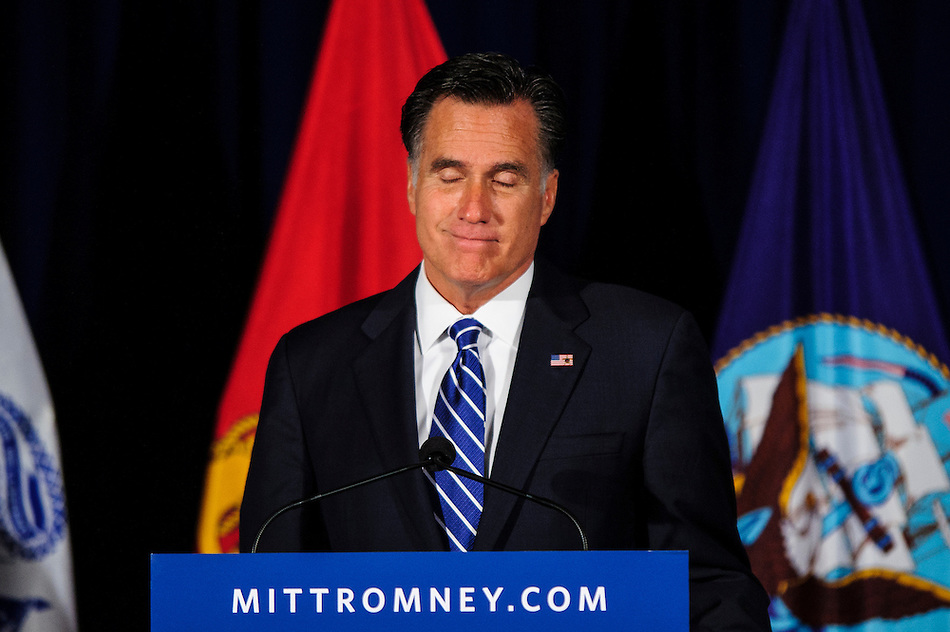 I file a lot of images.

When I edit a shoot there is very little that I throw away. Out of focus or irrevocably poorly exposed images are trashed, but everything else is kept.

I have many reasons for this. One being that you never know what information may lie in the frames before and after a select that you may need to reference someday. A frame two clicks before the one I want to use has saved my ass many a time when writing a caption.

The other big reason though is that you never know what someone is going to want to use. The photo above is a prime example.

I photographed Republican Presidential Candidate Mitt Romney during an event in Springfield, Va. recently and in one of the frames, he had is eyes closed. This was not one of the blinking shots that everyone will get from time to time. He actually had his eyes closed as he listened to the applause for something he just said to the crowd gathered.

Not only did I save the image, I also sent one to ZUMA Press with the rest of the 20-some frames I transmitted from the event. Mother Jones picked one up from ZUMA for a story about his comments made at a fundraiser caught on video talking about the 47% of American’s who will always vote for President Obama. Link below:

The Emotional Power of the “47 Percent” Comments Explained – Mother Jones

It is not an earth-shattering great image. But it just made me money.

I decided a long time ago that it is silly to throw out images, and it is even more true now that digital storage space is so cheap. Photographers would have never thrown out negatives, saving only the select frames. Why would you do it now?

If the common belief that it is hard to edit your own work is true and that it is always good to have someone else look over the work you are editing for a story or a contest, why would it not also be true that a photo editor may see something they want in what you would initially discard as useless.

I often get teased by other wire shooters for sending so many images to ZUMA. Where most photographers send 6 or 10 images, I send over 20. Many times the images are similar to others that I am sending except for a different expression or maybe the direction that a head may be turned in the frame.

I figure that I am not the editor who is looking through images for something that fits a story they are looking to put images with. Although I know what the story is on the day of the assignment, I do not know what other uses the images may be needed for in the future. Why would I limit my potential for sales by not sending the largest selection possible to ZUMA and my Archive?

Hard drives are cheap as is online storage with Photoshelter. Saving everything and making as much of it available as possible makes sense.

As a side note, it is worth noting in Dirck’s editorial that both TIME and Gamma both passed on the photo and sent it back to Dirck with the rest of the outtakes. They also “discarded” an image that one day they would want.