When it comes to documentary work or photojournalism there is always a healthy debate on cropping an image. Sports is a different story. It is still interesting to see and hear photographer’s reactions on message boards and blogs about sports images that appear in magazines like Sports Illustrated. There is a large group that thinks that just because an image appears on the cover and that the photographer is a “SI photographer” that the capture was framed that way and run full-frame.

In reality it is not really true.

Take for instance the photo I shot at the James Madison vs Montana game during the Div 1AA playoffs last year. The full-frame image is below: 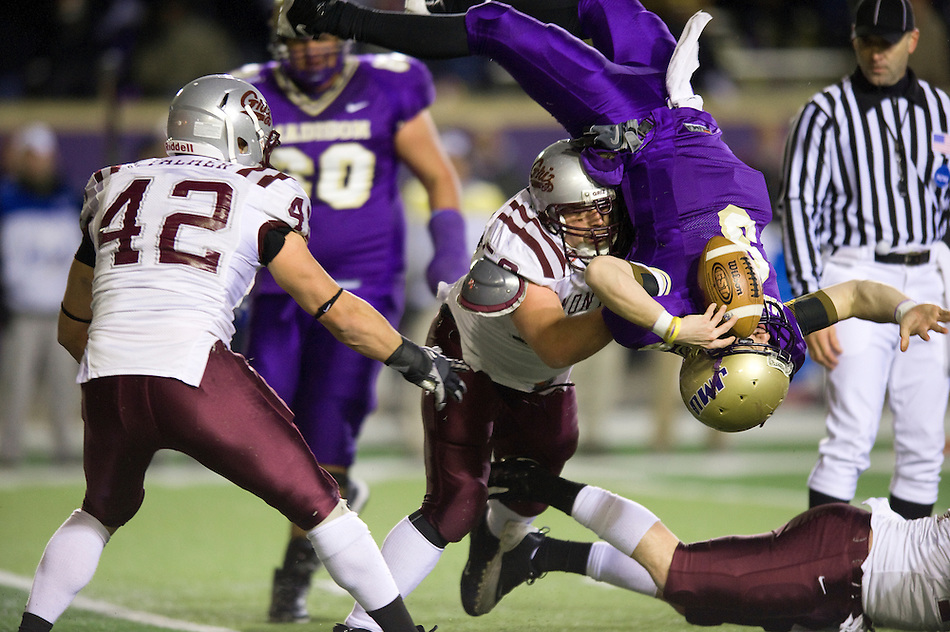 Sports Illustrated always wants the full-frame unaltered raw image file. So that was what I sent them after the game when I saw I had something they may be interested in for a “Leading Off” spread. Luckily they like it and they used it. But they did crop into it as you can see below. Another recent cover is the subject of a discussion on Sports Shooter. It is a photo by Bob Rosato from the Saints vs Dolphins game that appears on the November 1 cover of Sports Illustrated seen below: Because most sports photographers hold shooters for SI in high regard (including myself) because of their talent and the fact they get to shoot for the holy grail of sports photography, many would think that this was also full-frame, or at least close. In fact it was shot pretty wide and as a horizontal. See below: I think this is a valuable lesson for struggling beginners who try to capture this kind of end-zone shot with a tighter lens and not having much luck. Shooting it a bit looser betters your odds and gives you more options.

One last example comes from an old friend from my days of shooting professional golf. Fred Vuich does a lot of work for SI and recently had a cover seen below: Wonderful cover shot. The full-frame image is below: One thought on “To Crop or Not to Crop”